Get me outta here!

It’s my third year of welcoming the New Year here in Japan.  It’s truly unlike the noisy, rambunctious festivity it is in the Philippines.  As the Japanese went about their business, I often wondered how fun it would be to be home for the holidays with my big family – all eight members, plus our cousins, aunts, uncles, and Grandma.

Miss going out with this crazy bunch!

Altogether, there would be about twenty people.  It truly is a riot with all of them – what with the games, the singing, the exchanging of gifts, and later the unboxing.  I was often away from home starting in high school.  But no matter how busy I got, I made it a point to be home for the Christmas and New Year holiday.  It’s a different matter, though, now that I’m living abroad.

Next time, I hope to be included in the picture.

However, this year, it was like having a piece of home with me as I welcomed the year here with Mom.  For the second year in a row, my favorite Principal invited us as well as my fellow ALT (who came with her Mom as well) to a New Year party on the first day of the year.

We spent most of the day eating – the osechi ryori (Japanese New Year food), sukiyaki, salad, and ice cream.  His sons from the city had interesting stories to tell while we played with his other son’s charming baby boy.  Having spent the last New Year with them, their house and their company have become a lot more familiar.  So did another dear friend who invited us for dinner that same night with her family and treat us like her own. It’s beginning to feel a lot like home. 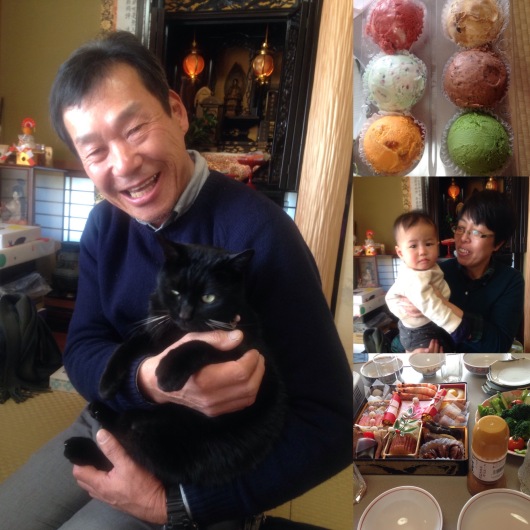 Feeling at home with this kind-hearted Principal and his family.

Our beloved Principal has done a lot to make us feel we belong and to keep us from getting homesick.  In Japan, this gesture means a lot to foreigners who often feel like outsiders.  As I struggled to make friends, he was the first person to reach out and make me feel I wasn’t alone.  I’m not the outgoing type and I don’t really need to hang out with friends a lot but living in the Japanese countryside and not being fluent in Japanese is a recipe for being shunned by most locals.  Two years ago, on our first few months in the job, he organized a gathering for us with the teachers and school staff.  To have a respected figure at work organize something and invite everyone was comforting because coming to Japan was like starting from scratch.

No one knows about your background.  Being respected back home doesn’t mean you would be when you work abroad.  In fact, in some countries, Japan included, they’ll probably doubt you and wait until you’ve proven you’re a competent employee and a trustworthy person.  It seems like it took a year for many co-workers and friends to open up.  Unfortunately, teachers and school staff get reshuffled each year so it’s like starting all over again after a year.

In the three years we’ve worked with our kind-hearted Principal, he regularly organized a gathering at least once a semester, often enough to make me feel like I’m regularly catching up with old friends.  We ate to our hearts’ content, chitchatted a lot with me speaking a Japanese word or two, and sometimes went to karaoke.  Even if more than two years have passed from the very first gathering and many of them work in different schools, the sight of their familiar faces remind me of the difficulties of my first year here and the friendship that they offered me.

For a moment, it seems like I’ve forgotten about blogging but I actually didn’t. I just shifted to writing on paper more.  It’s a wonder how the seemingly simple task of writing something on the computer has become so distracting.  Just to keep one’s self off from browsing unnecessary sites and straying from the task at hand is a lot of work.

It doesn’t help that almost every single authority on building a good online presence advises us to update on Instagram, Facebook, Twitter, and the likes to update on a daily basis, even hourly for some.  Don’t get me wrong, in some instances, this might be necessary, esp. for those in the media industry.  But must we succumb to the tyranny of distracting updates online all the time?

When our online school Joylingual (a big shoutout to all the students and staff who helped it start and grow) ceased operating to give way to the parent company’s operations, I felt a certain sense of freedom.  Little did I notice that in my five years of running Joylingual, I have felt an obligation to check my email and social media accounts several times an hour.  Even when I was out with family or friends, I felt like I was being unfaithful to it if I didn’t check for bookings and updates regularly.  I was the quintessential Girl Interrupted.

But now, I’m back to writing on paper – just like in high school, and it feels so right!

Having worked with and for the Japanese for about 10 years, I probably have become more careful about what I write.  Hence, I end up censoring myself too much.  But this year, I hope to bring back some of the hopefulness and talkativeness that went hiding these past few years.